Hoping everything will be fine with you.

“Don’t get discouraged, Hallie,” Kathy said, comforting her with a hug. “It sounds as if you have a bit of a mystery to solve. Maybe you should do a little spying on Maya.”

Feeling better, Hallie put on her scuba gear（潜水服）again and waited. Maya, the dolphin, had been swimming playfully, but suddenly she threw herself to the back of the tank where the filter box（过滤箱）was located. She stuck her nose down behind the box and then swam away.

Hallie followed Maya. “What was she doing here?” she wondered. When she looked behind the box, her question was answered. She swam back and saw Maya was in front of Kathy with a comb in her mouth waiting for her treat.

“Maya! Where did you get that?” demanded Kathy, taking the comb and throwing her a fish.

“I know,” declared Hallie, handing Kathy a handful of items, “I followed her to the filter box and these are what I found.”

From the look on Kathy’s face, Hallie knew everything was beginning to come to light.

“Do you remember the other day you said that Maya really liked her treats?” asked Kathy.“Well, I think this was more than a training exercise for Maya. Every time you found something in the tank, that meant one less fish for Maya. She couldn’t bring all the items to me at once, so she found a hiding place for them. That way you came up empty-handed, but Maya would always get her treat.”

“Okay, Maya,” said Hallie facing the dolphin, “you win! The treats are all yours.”

Maya dived down, and then jumped out of the water, turning herself over in midair. Shaking their heads in disbelief, Hallie and Kathy reached for the fish. Maya deserved the treat.

1.What was the “mystery” in the story?

A. The secret of Maya’s finding the items.

B. The secret of Hallie’s winning the game.

C. The reason for Maya’s liking her treats.

D. The reason for Hallie’s spying on Maya.

Who could have imagined that a treadmill（跑步机）on wheels would one day become a thing?!? Lopifit is an unusual means of transportation that allows you to power an electric bicycle by walking on a treadmill. 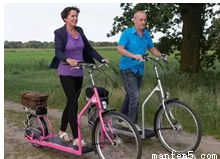 Lopifit founder Bruin Bergmeester says it all started when he asked himself the question “How can I use a treadmill outdoors?” He finally came up with a new design, adding an electric motor, and the Lopifit was born. It’s similar to an electric bicycle in that the motor only works when the rider puts power in as well. The Lopifit senses when you walk on the treadmill and uses the motor to turn a drive chain at the back of the treadmill, helping you reach a top speed of 17 miles per hour.

To use the Lopifit, simply turn on the battery（电池）and use your foot to slide the treadmill backwards and start the motor. Then get on and enjoy the ride! If you need speed, just walk on the treadmill, and if you want to coast（惯性滑行）, all you have to do is stay still and admire the view. To stop, you have two hand breaks.

The Lopifit first hit the streets in 2014 and, unsurprisingly, became a hit overnight. That was actually quite challenging for the company, because it started getting calls for orders, but it was nowhere near ready for mass production. The unique treadmill bicycle could be bought this year, and Lopifit is struggling to keep up with demand, although the price is up to $2,115.

Some people consider this means of transportation stupid and unnecessary, although there is a very loyal fan-base of so-called Lopifitters. They simply believe that if you’re going to walk, you might as well do it the old-fashioned way.

But the Lopifit does have the special advantage of helping you “walk” really fast without much effort, or walking at cycling speed, if you will.

A. can be powered by the drive chain

B. can work without an electric motor

C. works when you walk on the treadmill

D. stops when you slide the treadmill forward

2.What is Paragraph 3 mainly about?

3.What is probably the author’s attitude towards Lopifit?

A. Confident. B. Concerned.

Like many Czechs (捷克人), Luká? Bern?, 38, enjoys going out to the pub with his friends for conversation and a few beers. “I don’t drink every day,” he says. “I think about three times a week. When I go out, I usually have five to six beers at a time, about the same as my friends.” The beers are half-liters, or 500ml each.

Medical experts in over 40 countries around the world have agreed that drinking “too much” can cause harm. What they can’t seem to agree upon is just how much is “too much.” National safety levels are quite different, from a limit of 10g a day in the Netherlands to Denmark’s 60g.

There are a number of reasons for this. Dr. Larry Altshuler, a medicine expert for the Cancer Treatment Centers in Tulsa, explains that while everything is based on research, “Every group, race, and gender responds to alcohol differently.”

Also, researchers aren’t using the same models or methods. He adds, “It can be like apples and oranges. How do you measure alcohol? Units, drinks, bottles or cans? What’s the alcohol content（含量）? Is it light or heavy?” While a half-liter of four percent beer contains 16g of pure alcohol, a half-liter of five percent lager contains 20g.

Constance Scharff, a director of Addiction Research at Cliffside Malibu Treatment Center in California, says she believes the reason “is largely cultural.” “But the evidence is clear that the more you drink, the more likely you are to develop alcohol-related health problems.”

A. describe the habit of Luká? Bern?

B. advise readers to live a carefree life

C. direct readers’ attention to the topic of drinking

A. the alcohol limit for Czechs

C. the concern over the harmful effects of drinking

D. the difference in national safety levels of alcohol

3.According to the passage, what might determine the national safety standards of alcohol?

A. Drinking length and alcohol containers.

B. Drinking atmosphere and alcohol quality.

4.What may be the best title for the passage?

A. How Can Drinking Be Safe?

B. How Much Alcohol Is Too Much?

C. Why Does Alcohol Do Harm to Health?

D. What Harm Will Alcohol Cause to Us?

Did you know that money is not worth the paper it is printed on? Money is really just a symbol. 1.

Long ago, people did not use money. They made or grew food, clothes, and other things they needed. Later, people started trading. They would trade what they made to someone else in order to get different foods and goods. To trade like this is to barter（物物交换）.

The barter system was a good system. Bakers could trade bread for wheat. Weavers could trade cloth for meat. Trading not just let people work at certain jobs. 2.

4. People used to use all kinds of small things for money. They used shells, beads, feathers, seeds, and even salt. A group of people would decide the worth of a kind of shell. Other kinds of shells would be worth more or less. Then people had money that was worth a certain amount. It was easy to carry. It was easy to make change.

With time going by, we finally have the money that we use today. 5.

A. This is where money comes in.

B. That means it stands for something else.

C. They made clothes from wool from their sheep.

D. Bartering did not have a way to make change, either.

E. It also gave people a way to buy things they needed.

F. With money, we don’t have to travel with chickens, cows, or clay pots!

G. When people traded, they no longer had to make everything they needed.

I was sitting in the far back in a pizza house when I noticed the man, about thirty years old, carrying a pizza box. He sat down at the table to my right and then ______ his large dirty paper bag of clothing down on the floor. Obviously, this man was homeless and ______ a bath. He picked up the one small slice（薄片）of pizza and very slowly, very carefully, he began to eat, taking very little ______.

He finally finished his meal and did something that I would never ______. He turned the box on its corner and slid the few ______ bits into one corner. Then he ______ his index finger（食指）and tried to pick up the small bits.

I got four large slices of pizza from the counter and sat them down on his table, saying, “I thought you ______ like to have a few slices.”

I did not stop at all but walked around behind him. As I passed him, I reached out and ____

him on the back, just one time, very softly with my hand. I hope that man knows that someone, someplace, ______ him as a human being. And I am so ______ that I have never forgotten what it feels like to be down, out, dirty and hungry.

14.A. cares about B. thinks highly of C. relies on D. watches out for

As a general rule, a band may start as a group of high-school students 1. (share) the same interest in music. They may first practise their music in someone’s house. And then the musicians may get the chance to give 2. (perform) in pubs or clubs, for which they are paid

3. cash. As time goes by, they gradually become known to the audience and some even make records!

The Monkees, 4., started in a different way. Of 5. (it) four members, only one was good enough and the other three just pretended 6. (sing) during the broadcasts. To be honest, it couldn’t 7. (call) a real band in the beginning. Anyhow, they succeeded and became so popular 8. their fans formed clubs in order to get more familiar with them. 9.

5.那个有音乐天赋的男孩被记者包围了。（have a gift for; surround）

Gemini Television is a large independent broadcaster（广播公司）. They have had success in television with mini-series and situation comedies. Recently the company has decided to move into film--making.

They have received some film projects from directors working in different countries.

Title: Hands up for Happiness

Plot(情节): Two pairs of twins, one Italian and one Russian, meet and start relationships. They have problems telling the difference between each twin. Will they end up with the right person?

Cast(演员阵容): Unknown actors as need to be real twins.

Plot: Story takes place 500 years in the future. The Earth is attacked by aliens. A small group survive the attack and try to save the planet. Will they succeed before the aliens reproduce?

Cast: To be decided (by the director) .

Plot: A woman picks up the wrong bag at an airport and is mistaken for a foreign agent who has secret documents. She is tracked around the world by criminals, government agents and the real owner of the bag.

Special features: Many locations around the world, lots of twists and turns in the story, strong possibility for a follow-up, and for turning the lead character into a female James Bond (a character from serial films).

Plot: A story of family honour, revenge(复仇) great love and of good vs. bad. A young Japanese man brought up in the USA returns to the country of his birth. He discovers the dark secret of the family, and the reason he was brought up in the USA. His search for the truth leads him to the Philippines and to the beautiful princess Satsuki.

Audience: Worldwide, but probably over 18 due to violence.

1.What are specially needed to produce Alien Attack?

A. Two pairs of twins.

2.Which of the following films may be turned into a series?

A. Alien Attack. B. Exit Strategy.

3.The four films mentioned in the text.

A. are of the same type

B. all have fight scenes

C. haven’t decided on the actors

D. are all intended for teenagers