Recently, I felt like I reached a very low point in life. My relationships weren't good, I wasn't enjoying my classes, and I felt like I had nothing to_________.My life seemed to be full of endless homework, tests and loneliness. Nothing anyone said seemed________to me. I wasn't sure wha

During these days, I had trouble sleeping. I had to take sleeping pills but still woke up in the midnight. I had no_________but to tell my dad. He_________the book The Secret. I immediately bought the e-book online and read the whole thing that night. I'm_________quite a stubborn person, but the effect on my mood after finishing the book was_________. Suddenly, I felt like life was beautiful again. I had never felt such a deep and quick_________in my life before.

In fact, the book's message was very simple—think positively(积极地).The book had many success stories about how people were able to________money, soul mates(心灵伙伴)and old friends back into their lives. I started learning to thank everything in my life like them. Little by little, I realized that The Secret could only work________I believed these people's success stories.

Now I'm sure I can bring myself happiness.

I am Li Hua, chairman of the Student Union of Xin Hua High School.

Thank you for your attention! Best wishes!

There are two ways of driving in the world: if the driver’s seat is on the left and cars travel on the right side of the road, it is called “left-hand driving”, as it is in China, while the other way of driving is called “right-hand driving”, as it is in Britain. Nowadays, around 65% of the world’s population drives on the right of the road, while the rest is used to driving on the left.

Though no one knows the exact reasons, it seems likely that people in ancient times travelled on the left. Roman coins show pictures of horsemen passing on each other’s right. And right-hand people generally got on a horse from the animal’s left. Obviously, it’s safer to do this at the left side of the road, and it makes sense for the horse to be ridden on the left.

A change happened in the late 1700s. When Napoleon conquered nations, he forced them to travel on the right side of the road, which spread left-hand driving throughout Europe. However, Britain still stuck with the right-hand driving rule and countries which were part of the British Empire (帝国) were made to follow. This is why India, Australia and the former British colonies (殖民地) in Africa continue to drive on the left. One exception is Egypt, as that country was defeated by Napoleon before becoming part of the British Empire.

Some countries changed sides’ until modem times. Sweden only moved to driving on the right in 1967 and Iceland changed the following year. Ghana changed sides in 1974. On September 7,2009, Samoa became the third country ever to change from left-to-right-hand driving for the reason that it made it easier to import (进口) cheap cars from right-hand driving Japan, Australia and New Zealand.

So if you want to travel to another country or go on business, make sure you know whether it is left-or right- hand driving to avoid unnecessary troubles.

1.Which picture shows the correct driving in Britain? 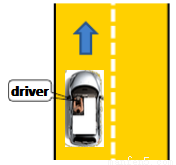 A. travelled on the right

B. rode past each other’s right

C. got on the horses from the right

D. behaved as they liked

3.In modem times, countries follow the same driving way except .

4.What is the writer’s purpose for writing this passage?

A. To introduce the development of the two ways of driving.

B. To compare the differences of the two ways of driving.

C. To explain the advantages of the two ways of driving.

D. To complain about the change of the two ways of driving.

Mary hoped that her father would be as easy___________ as her mother, who always liked perfume.

A. pleasant B. pleased C. to please D. to be pleased

In Western countries, bread is one of the most important foods. When they get up in the morning many people eat toast (烤面包). They spread butter and jam on their toast. People eat bread at other times of the day too. For example, at main meals, they often eat bread with soup.

It's also very common to eat sandwiches. A sandwich is two pieces of bread with a filling inside - salad, cheese or fish. A hamburger is a kind of sandwich.

There are many different kinds of bread. Some are special to some countries. For example, the baguette (法国棍子面包) is a long, thin loaf that began in France.

There is also white bread and whole-wheat (全麦面) bread. What's the difference? White bread is refined (精制的). It has things taken out of it to make it softer and easier to eat. The trouble is, white bread also has lots of goodness taken out. Although some people dislike the taste of whole-wheat bread, it is much healthier.

Some kinds of bread have additives (添加剂). They are put into the bread for many reasons. Some additives are good for you - for example vitamin C. Others are there to make the bread last longer. Still others to make it taste better - but they do not necessarily make the bread healthier to eat!

1.People in the west have as their main food.

A. butter B. bread

2.The fourth paragraph tells us

A. how to make white bread

B. how to make whole-wheat bread

C. the difference between white bread and whole-wheat bread

3.Which of the statements about additives(添加剂) is WRONG?

A. Not all the additives are good for our health.

C. Some additives are put into bread to make bread healthier.

D. To make bread taste better, some additives can be put into bread.

A. are caused B. were caused

C. have caused D. will cause

Tom was very anxious for the coming exam and told me worriedly, “______, I suppose I’m frightened of failing.”

5.A. falling off B. moving away C. dropping on D. putting aside

In the coming months, we are bringing together artists form all over the globe, to enjoy speaking Shakespeare’s plays in their own language, in our Globe, within the architecture Shakespeare wrote for. Please come and join us.

This great occasion(盛会) will be the National Theatre of China’s first visit to the UK. The company’s productions show the new face of 21st century Chinese theatre. This production of Shakespeare’s Richard III will be directed by the National’s Associate Director，Wang Xiaoying.

One of the most famous theatres in Georgia,the Marjanishvili,founded in 1928,appears regularly at theatre festivals all over the world. This new production of It is helmed（指导）by the company’s Artistic Director Levan Tsuladze.

By translating the rich and humourous text of Love’s Labour’s Lost into the physical language of BSL,Deafinitely Theatre creates a new interpretation of Shakespeare’s comedy and aims to build a bridge between deaf and hearing worlds by performing to both groups as one audience.

The Habima is the centre of Hebrew-language theatre worldwide ,Founded in Moscow after the 1905 revolution, the company eventually settled in Tel Aviv in the late 1920s,Since 1958, z&xxk they have been recognised as the national theatre of Israel .This production of Shakespeare’s The Merchant of Venice marks their first visit to the UK.

1.which play will be performed by the National Theatre of China?

C. As You Like It D. The Merchant of Venice

2.What is special about Deafinitely Theatre?

A. It has two groups of actors B. It is the leading theatre in London

C. It performs plays in BSL D. It is good at producing comedies

3.When can you see a play in Hebrew?