Do you sometimes argue about what seems to you to be a simple fact? Do you argue whether it’s cold outdoors or whether the car in front of you is going faster than the speed limit (限速)?

Each man’s idea of the animal came from his own experience. So if someone disagrees with you about a “simple fact”, it’s often because his experience in the matter is different from yours.

To see how hard it is for even one person to make up his mind about a “simple fact”, try this simple experiment. Get three large bowls. Put ice water in one. Put hot water in the second. Put lukewarm water (温水)in the third. Now put your left hand in the hot water. Put your right hand in the lukewarm water. Your right hand will tell you the water is cold. Your left hand will tell you it is hot.

A. your left hand B. your right hand

C. the water D. the bowl

C. Simple facts are different sometimes. D. People often disagree with each other.

A. learn from the blind men B. not agree about simple facts

C. never think about simple facts D. never decide anything with one side

Please join us for our annual Walk For Charity.Starting in Weldown,you and your friends can choose a delightful 10,20 or 30 kilometers' route.

The money raised will provide support to help people all over the world.Start collecting your sponsors now and then simply come along on the day.Please read the instructions below carefully,especially if you require transport to and from Weldown.

See you on Sunday 15 April.

PS.Well done to last year's walkers for helping to raise a grand total of ￡21,000.The money has already been used to build a children's playground. 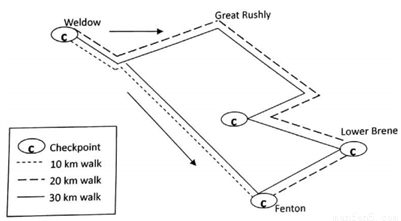 The organizers reserve the right to refuse late-comers.

CLOTHING should be suitable for the weather.If rain is forecast,bring some protection and be prepared for all possibilities.It is better to wear shoes that have been worn in,rather than ones that are new.

ROUTE MAPS will be available from the registration point.The route will be sign-posted and arranged.Where the route runs along the road,walkers should keep to one side in single file,facing oncoming traffic at all times.If you need help along the route,please inform one of the staff.

Free car parking is available in car parks and on streets in Weldown.

For the 10 and 20 kilometers' routes,a bus will be waiting at Fenton to take walkers back to Weldown.The bus will leave every half hour starting at midday.The service is free and there is no need to book.

1.When may a walker be forbidden to join in the walk?

A. Being late for the walk. B. Parking a car on the streets.

C. Choosing the shortest route. D. Bringing no clothes for the weather.

2.According to the route map,where does the 20 kilometers' walk finish?

3.What is the walker warned of?

A. To prepare new shoes for the walk. B. To book the bus ahead of time.

C. To care about their own safety. D. To donate at the registration point.

4.When will the first bus leave?

The extraordinary Eastgate Building in Harare, Zimbabwe’s capital city, is said to be the only one in the world to use the same cooling and heating principles as the termite mound (白蚁堆).

Architect Mick Pearce used precisely the same strategy when designing the Eastgate Building, which has no air conditioning and almost no heating. The building is the country’s largest commercial and shopping complex but uses less than 10% of the energy of a conventional building of its size. The Eastgate’s owners saved 3.5 million on a 36 million building because air conditioning didn’t have to be equipped.

The complex is actually two buildings linked by bridges across a shady, glassroofed atrium (天井) open to the air. Fans suck fresh air in from the atrium, blow it upstairs through hollow spaces under the floors and from there into each office through vents (通风口). As it rises and warms, it is drawn out via ceiling vents and finally exists through fortyeight brick chimneys.

This is all possible only because Harare is 1,600 feet above sea level, and has cloudless skies, little dampness and rapid temperature swings-days as warm as 31 °C commonly drop to 14°C at night. “You couldn’t do this in New York, with its fantastically hot summers and fantastically cold winters,” Pearce said.

The engineering firm of Ove Arup & Partners monitors daily temperatures. It is found that the temperature of the building has generally stayed between 23 °C and 25 °C, with the exception of the annual hot period just before the summer rains in October and three days in November, when a doorkeeper accidentally switched off the fans at night. And the air is far fresher than in airconditioned buildings, where up to 30% of the air is recycled.

1.Why was Eastgate cheaper to be built than a conventional building?

A. It was designed in a smaller size.

B. No air conditioners were fixed in.

2.What does the underlined word “it” refer to in Paragraph 3?

A. Fresh air from outside.

B. Heat in the building.

3.Why would a building like Eastgate not work efficiently in New York?

A. New York has less clear skies as Harare.

B. Its dampness affects the circulation of air.

D. Its temperature changes seasonally rather than daily.

A. allows a wide range of temperatures

B. functions well for most of the year

A. to look B. to be looking C. to have looked D. to have been looking

Another advantage is that it’s so slim that it won’t too much space in your bag.

Phelps, the 31-year-old US swimming star, was seen1. purple circles dotting his shoulders and back at the Rio Olympics. The circles2. (cause) by the ancient Chinese treatment, in which he is a great3. (believe). The Chinese treatment, known as “baguan”, uses heated glass cups 4.(create) a suction (吸气) on the patient’s skin, causing a circular mark.

I remember, some 40 years ago, when I fell sick, my mother always did cupping on me. It scared me. I would cry. 5. my mother would say: “ Be patient! It will hurt just a bit, like an ant bite.” So I would let her, and it 6.(usual) helped. Now when I have fever, flu, or muscular pain I go to a “cupping spa” and get it done. Not that I don’t trust medicines, but I also believe in cupping. I got it done just last month for my fever, 7. wasn’t coming down with medicines and injections. One session of cupping and the fever was 8. (go).

The US National Institute of Health says on 9. (it) website that “cupping” is considered generally safe for 10.(health) people when performed by a trained health professional.

I first met Paul Newman in 1968, when George Roy Hill, the director of Butch Cassidy and the Sundance Kid, introduced us in New York City. When the studio didn’t want me for the film - it wanted somebody as well known as Paul - he stood up for me. I don’t know how many people would have done that; they would have listened to their agents or the studio powers.

The friendship that grew out of the experience of making that film and The Sting four years later had its root in the fact that although there was an age difference, we both came from a tradition of theater and live TV. We were respectful of craft（技艺）and focused on digging into the characters we were going to play. Both of us had the qualities and virtues that are typical of American actors: humorous, aggressive, and making fun of each other - but always with an underlying affection. Those were also at the core（核心）of our relationship off the screen.

We shared the brief that if you’re fortunate enough to have success, you should put something back - he with his Newman’s Own food and his Hole in the Wall camps for kids who are seriously ill, and me with Sundance and the institute and the festival. Paul and I didn’t see each other all that regularly, but sharing that brought us together. We supported each other financially and by showing up at events.

I last saw him a few months ago. He’d been in zxx.k and out of the hospital.He and I both knew what the deal was,and we didn’t talk about it.Ours was a relationship that didn’t need a lot of words.

1.Why was the studio unwilling to give the role to author at first?

A. Paul Newman wanted it. B. The studio powers didn’t like his agent.

C. He wasn’t famous enough. D. The director recommended someone else.

2.Why did Paul and the author have a lasting friendship?

A. They were of the same dge. B. They worked in the same theater.

C. They were both good actors. D. They han similar charactertics.

3.What does the underlined word “that” in paragraph 3 refer to?

A. Their belief. B. Their care for chileden.

C. Their success. D. Their support for each other.

4.What is the author’s purpose in writing the test?

A. To show his love of films. B. To remember a friend.

C. To introduce a new movie. D. To share his acting experience.