Life is like a running race. Whatever difficulties you meet, don't ________. Just move on.

—Do you know when Grandma is going to visit us, Alice?

________ it is often cold in the mountains, you'd better wear warm clothes to go outside.

Which sentence should be put at the first of the paragraph on the right?

________ Water and soil help provide us with necessary' food and drinks. Coal, oil and natural gas are not only useful for families, but have wider use for factories.

A.Our environment is changing for the worse.

B.People depend on natural resources to live.

C.People have many ways to protect the environment.

D.Some natural resources will run out if we use them carelessly.

—Kevin, shall we visit Nanjing Imperial Examination Museum use for factories tomorrow?

Which of the following sentences has a different sentence structure from the other three?

B.Summer is my favourite season.

—Andy's birthday is coming up, and I'm planning a surprise party for him.

Have you heard of Maria Montessori? She is a famous Italian educationalist, whose method of teaching has _______ people all over the world.

Born in Italy in 1870, Montessori became the first woman doctor in her country after she graduated from _______ school in 1896. She did many operations for poor children. Later, she _______ a "Children House" in Rome in 1907. The rooms were bright and colorful. This was the place where she developed the Montessori Method, which was formed during 1908-1913.

Maria thought that children must be free to learn _______ being criticized (批评) or limited. She let the children make their own _______ of what they wanted to do and work with their own speed, not the rest of the class or the teacher. As a result, children love learning and this gives them confidence. Very young children learn to dress _______ and to put their toys away so they can become independent (独立的). Children are _______ to repeat activities as often as they wish, and they develop their observation (观察) skill by doing different activities.

In addition, the Montessori Method thinks that a teacher is a _______, not a leader of the classroom, helping to open students' eyes to wonder around them.

A typical room in a Montessori school has many things children can use. The furniture is _______ so they can arrange (安排) it as they wish. Because the environment offers many activities, children like to work together and they develop a social life based on cooperation (合作) instead of ________.

Maria Montessori travelled around the world to train teachers to use her method. In 1950, she received the World Peace Education Badges.

Sandy got the following messages yesterday. Read them carefully and find the best answers to the questions. 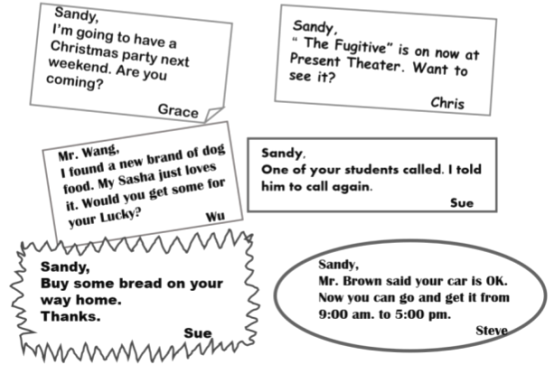 1.When is Grace going to have a party?

3.What did Mr. Brown most probably do for Sandy?

B.He wanted to buy her car.

C.He prepared dinner for her.

Animals have their special ways to deal with hard times in nature. The superb fairy-wren, one kind of bright-blue bird in Australia, is one example. This year, a ten-year study showed that this small bird has eggs of different sizes in different kinds of weather. When the weather is hot and dry there is less food for young superb fairy-wrens, and they die easily. So the mother bird will make larger eggs to help her babies grow stronger inside before they break out of the eggs into the "hungry" world.

However, not all mother birds are able to do this. Only those with at least one male child can. When the weather is "good", the mother will make smaller eggs, and her sons will bring food back for their baby brothers and sisters from the eggs. With her sons' help, the mother can save more energy to make larger eggs when the weather is bad. Isn't this amazing?

1.Which is the best title of the passage?

2.What does the underlined word "this" mean in the passage?

B.Growing stronger inside the egg.

D.Helping baby birds break out of the eggs.

3.What can we learn about superb fairy-wrens from the passage?

B.Male birds can usually live for over ten years.

D.Mother birds make smaller eggs when there is less food outside.