1.Why did John look tired?

2.When did John’s boss want the task finally?

3.What did John’s boss want the task for?

1.Where can visitors know about the life of local people in Bangkok?

2.What can we learn from the passage?

A.You can enjoy modern art in the Culture Center.

C.It is not convenient to go window shopping in Bangkok.

3.What is the passage mainly about in Bangkok?

Teach your child about safety.

When you teach safety rules to your little child, it will help if you provide clear reasons for the rules. Try to help your four-year-old child understand that these rules are not used to spoil his fun, but to keep him safe. The fairer your rules seem to your child, the more likely he is to follow them.

Try to avoid scaring them. The reason why you don’t want your child to climb up onto the top of the tree is not “You’ll fall off the tree and break your neck and die”. but “If you do fall off the tree, you’ll get hurt.” If you exaggerate possible dangers, your child will not believe that your rule is serious.

When your child doesn’t follow your safety rules, you need to make him see that unsafe behavior is dangerous. If your child runs out into the street, you should immediately pull him back, repeat your rules, explain your rules and warm him not to do it again.

If your safety rules seem fair to your child, he will probably be ready to follow them and even accept them as his own rules. And they will gradually become his safety habits and part of his developing consciousness.

1.What does the underlined word “spoil” mean?

2.What should we say to a child if he climbs up onto the top of the tree?

C.You may break your neck. D.You may fall off the tree and get hurt.

3.According to the passage, what should safety rules be?

4.Which of the following is TRUE?

A.Parents should set a good example.

B.Children are more likely to get hurt.

D.Children are not allowed to play outside alone.

5.Who is this passage written for?

High-speed railways, Alipay, shared bikes and online payment are seen as the new four great achievements of China by young foreigners, according to a video survey by the Silk Road Research Institute of Beijing Foreign Studies University. In the video, young people from 20 countries along Belt and Road Routes were asked to name great achievements that had influenced their lives in China. The following is what they said from 4 young people of them.

1.What does Justin think of the high-speed railways in China according to his words?

3.What does the underlined phrase “be in a tough spot” mean?

A.Get into trouble. B.Lose your way.

4.Which of the following is TRUE according to the above information?

C.We can pay for everything by Zhi Fu Bao in Beijing.

D.Zhi Fu Bao is the only way of paying for things.

5.What conclusion can we draw about the new four great achievements?

A.They are only liked by young people.

C.They are the signs that China is improving rapidly.

D.They were brought to the countries along Belt and Road Routes.

Birth order—does it matter? Are you different because you are the first, second, or third child in your family—or maybe the last of nine?

A study found that first-borns have an average IQ that is three points higher than people who fall into a different place in the birth order, perhaps because first-borns often help younger brothers and sisters, which improves their own skills. In 2007, an international organization of CEOs found that 43% of CEOs are first-borns, 33% are middle children, and 23% are last-borns. First-borns are more likely to be doctors and astronauts and get higher pay.

Then there are the middle children: we have not ignored (忽视) them! Many middle children are short of one-on-one time with their parents. They often feel short-changed: the oldest gets more rights, and the youngest is spoiled (宠坏的). Though they may be ignored, middle children are more likely to grow into easy-going adults.

Many factors make us who we are, but if the research is correct, birth order may be one of the most important factors.

2.What can we learn about Jim Carrey?

A.He is a middle child. B.He is likely to be serious.

C.He is a successful businessman. D.He is likely to be agreeable.

3.What does the underlined sentence mean?

4.What can we learn from the 4th paragraph?

C.Middle children are more likely to get on well with others.

5.What would be the best title for the text?

A.What makes you powerful B.How you can be a CEO

C.What influence birth order has on you D.How you can grow up

The first time I saw Carlos I would never have believed he was going to change my life. I had my arms full of books and I was rushing into the classroom when I ran into something solid. It was Carlos.

Of course, the class began to laugh. Angry, I walked to my seat without a word.

I glanced back to see if Reed Harrington was laughing with the rest. That would be the last straw. To my relied, Reed was studying chemistry and did not seem to be aware of anything else. I didn’t know why I considered Reed my friend. Maybe just because he was a good two inches taller than me. Anyway, every time I blew out my birthday candles and made a wish, it was for a date with Reed Harrington.

“Take that seat,” Mr. McCarthy told the cocky newcomer Carlos, pointing to the only empty one, in the back of the room.

Carlos laughed widely. “But I need a couple of dictionaries.” Again, the class laughed, but now they were laughing with Carlos, not at him. He had been here only 10 minutes and already he had them on his side.

The bell rang for classes. As I stood up to go, I saw Carlos coming toward me. “I’m sorry I embarrassed you,” he said. I looked straight ahead over the top of his black hair. “That’s all right.”

“I ought to know better.” He was still blocking my way. “What’s your name?” “Karen Forbes.” He held out his hand. Unwillingly, I shook hands with him. He looked up at me seriously with his brown eyes. “I am Carlos. I don’t see why you’re so touchy.”

It was the school elections that made me think of Carlos again. Reed Harrington was voted president and Carlos vice-president. “How come?” I kept asking myself, “How come this shrimp who’s only been in town for a little over a month gets to be so popular?”

So on that morning, I stopped Carlos and said, “It doesn’t seem to bother you — being short.” He looked up at me, “Of course I mind being short. But there isn’t anything I can do about it. When I realized I was going to have to spend my life in this undersized skin, I just decided to make the best of it and concentrate on being myself.” “You seem to get along great,” I admitted, “But what about me? Nobody wants to date a girl taller than he is.” “The trouble with you is you’re afraid to be yourself. You’re smart. And you could be pretty. In fact, you might be more than pretty.” I felt myself turning red...

1.Why was the author angry?

A.Because the class made fun of her.

B.Because she had to carry many books.

C.Because Reed Harrington laughed at her.

2.What can we infer from Paragraph 4?

B.The author hoped Reed was laughing with others.

C.The author thought Reed was the same as the others.

3.What can we know about Carlos?

4.What does the underlined word “touchy” in Paragraph 8 probably mean?

5.According to the passage, which is the most likely ending?

B.Carols and the author argued with each other.

D.Carlos was elected president of the student committee.

Once there was a farmer who owned a donkey. The donkey was now too ________ to work. One day, it fell into the farmer’s well. The farmer thought neither the donkey nor the well was worth the trouble of saving. ________ he called his neighbors together. He told them ________ had happened and asked them to help carry dirt to bury the old donkey in the well. At the beginning, the donkey was very sad. But as more and more dirt hi his back, an idea came to him: he should shake it off and climb up! “Shake it off and climb up! he told himself again and again. No matter how it ________, the old donkey fought hard to shake the dirt off and climb up! Before long the tired old donkey had stepped over the wall of that well! The dirt hadn’t ________ him, but had helped him. It was all because of his attitude that he saved himself.

What’s life? It’s like a big bag. The bag is filled with happiness and sadness, failure and success, and hope and despair. Experience in life teaches us 1. (many) lessons and makes us better people. With each passing day, we learn how to deal with problems in our 2. (day) life.

Love plays a main role in our life. 3. love, a person could become terrible. In the early stage of our life, our parents are the ones from whom we get much love and care. They tell us what’s correct and wrong, good and bad. But we seldom care about their words 4. we have our own kids.

Happiness may always 5. (bring) us a peaceful mind. And sadness is most 6. (like) caused by the death of a loved one, failure or despair. But all of these things 7. (pass) away eventually.

Failure is the mother of success. It shows us that how difficult it may be if we want to succeed. You know no one is born with ability to succeed. So, when you fail to do something, don’t feel upset but keep on 8. (work) until you succeed. Remember, success brings us money, proud and self-respect. It’s important 9. (keep) a clear mind after we achieve.

Hope is what keeps life going. It comes from 10. (patient) and makes us dream. Tomorrow is unknown, for it could either be bright or dark. So in order to enjoy a better tomorrow, the only choice is to work hard today.

Bees can have three colors. They can be yellow, red and orange. All bees are black in some places.

Bees live in many places. They live in Africa, Australia, Asia, Europe, North America and South America. The only continent that bees do not live on is Antarctica! I understand why they don’t live in Antarctica. It’s too cold!

Most of the time, bees are nice to humans. If you do not bother them, they will not bother you. Have fun watching the bees this summer! 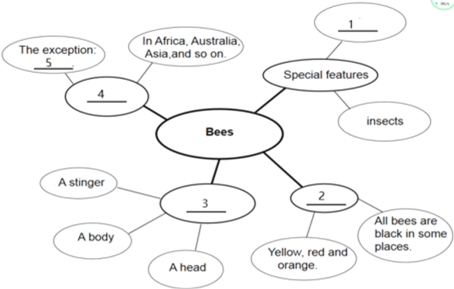