Everyone loves holidays and festivals. But do you know a holiday that is celebrated every month? Yes, it's the only holiday that takes place twelve times a year—Bonza Bottler Day.

Elaine Fermont from America came up with the idea for Bonza Bottler Day on August, 1985. She created it when she realized that there were no special chances to celebrate one month. She decide to give herself a reason to have a party and some fun with this special day every month.

Mrs. Fremont held a competition to give the day a special name, which a student from Australia won. When Australians like something, they might shout,” Bonza!”. The word means super, great or fantastic. And “Bottler"is slang(俚语)for something excellent. So the holiday is known as Bonza Bottler Day.

Bonza Bottler Day has no tradition. You are free to do whatever you want. People in offices and hospitals bring food to share. Bonza Bottler Day is a favorite with many schools because it gives a break to students. The holiday can be Candy Day, Ice Cream Day, Be Kind to Classmates Day, No Homework Day, Picnic Day, and the list goes on.

Why not celebrate Bonza Bottler Day in your own ways and have fun?

1.Which of the following dates is NOT a Bonza Bottler Day?

2.According to the article, who named Bonze Bottler Duy?

3.Which of the following statements(陈述) about Bonzu Bottler Day is TRUE?

A.It is celebrated when the numbers of the year, the month and the day are the same.

B.Mrs. Fermont created it because she wanted to give herself a reason to organize a competition.

C.The name of the festival had nothing to do with Australian culture.

D.People can do all the things that they like to celebrate it.

Differences between colds and flu

Both colds and influenza(flu)(流感) are caused by viruses and the two illnesses can have similar symptoms(症状). At first it can be difficult to tell the difference. In general, the symptoms of influenza are more serious and last longer than those of a cold.

The main difference between cold and flu symptoms is that flu more commonly includes fever: the fever can be 38℃ or higher and last for 3-5 days. The great tiredness caused by flu can last for weeks while cold symptoms are generally not serious and last for about 1 week. Also, runny nose is more common with cold than flu. Vomiting(呕吐) is another key difference: vomiting is not usually connected with the common cold but can be found in flu.

Although the differences above are generally true, it is impossible to know for sure if it is flu or cold. For example, it is possible to have flu without fever.

Antibiotics(抗生素) don’t work against a cold or flu because they attack bacteria(细菌) instead of rinses, You can treat yourself at home by

?getting plenty of rest and sleep (this means staying home from work or school)

?and if you have a sore throat, eating soft foods that are easy to swallow.

See your doctor if you have cough and high fever (38℃ or more) that is not improving, trouble breathing, chest pain, or if you have other worries about your symptoms.

A.at first it can be easy to tell the difference between colds and flu

B.compared with the symptoms of a cold, flu’s symptoms usually last longer

C.fever is more common with cold than flu

D.vomiting cannot be found in a common cold

2.Which of the following is suitable for ① ?

A.Treatment for colds and flu

B.Difference between bacteria and viruses

C.Stopping the increase of colds and flu

D.Advantages of staying at home

A.ask us to act to stop the spread of flu and colds

B.warn us of the danger of having flu and colds

C.let us have a better understanding of flu and colds

D.teach us how to stop flu and colds 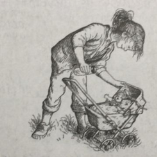 Every morning after breakfast, Wilbur walked out to the road with Fern and waited with her till the bus came. She would wave good-bye to him, and he would stand and watch the bus until it vanished around a turn. While Fern was in school, Wilbur was shut up inside his yard. But as soon as she got home in the afternoon, she would take him out and he would follow her around the place. If she went into the house, Wilbur went, too. If she went upstairs, Wilbur would wait at the bottom step until she came down again. If she took her doll for a walk in the doll carriage, Wilbur followed along. Sometimes, on these journeys, Wilbur would get tired, and Fern would pick him up and put him in the carriage alongside the doll. He liked this. And if he was very tired, he would close his eyes and go to sleep under the doll's blanket. He looked cute when his eyes were closed, because his lashes were so long. The doll would close her eyes, too, and Fern would wheel the carriage very slowly and smoothly so as not to wake her infants.

One warm afternoon, Fern and Avery put on bathing suits and went down to the brook for a swim. Wilbur tagged along at Fern's heels. When she waded into the brook, Wilbur waded in with her. He found the water quite cold--too cold for his liking. So while the children swam and played and splashed water at each other, Wilbur amused himself in the mud along the edge of the brook, where it was warm and moist and delightfully sticky and oozy.

Every day was a happy day, and every night was peaceful.

Wilbur was what farmers call a spring pig, which simply means that he was born in springtime. When he was five weeks old, Mr. Arable said he was now big enough to sell, and would have to be sold. Fern broke down and wept. But her father was firm about it. Wilbur's appetite had increased; he was beginning to eat scraps of food in addition to milk. Mr. Arable was not willing to provide for him any longer. He had already sold Wilbur's ten brothers and sisters.

"He's got to go, Fern," he said. "You have had your fun raising a baby pig, but Wilbur is not a baby any longer and he has got to be sold."

C.When Wilbur got tired, Fern would put him in the carriage alongside the doll

D.If Wilbur was very tired, he would close his eyes and go to sleep under the doll's blanket

2.According to the passage, the underlined sentience “Wilbur tagged along at Fern's heels.”in Paragraph 2 means________.

A.Fern was good at looking after infants

B.Fern would make efforts to stop Wilbur from being sold

C.Fern didn't get along well with Mr. Arable because he would sell Wilbur

Hobbies are something we enjoy doing in our free time for fun or entertainment. Almost everyone has some kind of hobby.

1. That is because they have different interests and jobs. People who sit at a desk all day long like to develop active hobbies while people like professional(专业的) sports players prefer quiet hobbies. 2.

3. For example, they like watching TV, reading, window-shopping, going to the movies and so on. These hobbies need no special training. They can also choose hobbies that are not so easy to develop, such as painting, playing the piano. 4.

5. They have to finish a lot of homework, to take many examinations and to fight for their future. But as the saying goes, “All work and no play makes Jack a dull boy.”

B.The choice of hobbies is different from person to person.

C.However, students are busy with their schoolwork.

D.To them, developing such hobbies is tiring and boring.

F.They want to make a change to keep a balance between work and play.

G.People can choose hobbies that are very popular and easy to develop.

Yuan Longping has solved the problem of hunger for many people in different parts of the world and we all think________(高度地) of him.