The young idol with positive energy

A fine example has endless power. As a pop star, he is q1. popular in Asia with more than 70 million followers on Weibo. As a role model, he was chosen by the United Nations Environment Programme (UNEP)（联合国环境规划署）as the UN Environment National Goodwill Ambassador(亲善大使) in April 2018.

The example m2. above is the Chinese singer and actor Wang Junkai, or Karry Wang, the leader of TFBOYS. As UNEP’s y3. ambassador, Wang attended a United Nations(UN) meeting in Kenya on March 14. He gave a speech in English on sustainable(可持续的) fashion.

In an i4. after the meeting, Wang said that he would like to spread the concept(观念) of environmental protection a5. the world, and to build a better sustainable future for humans and our planet.

In fact, it’s not the first time that Wang has contributed to h6. people understand the importance of protecting the world. In 2016, Wang widely shared the wildlife activities, reaching 400 million viewers. A year later, he publicly spoke out on the urgent need to protect wildlife in d7.. He named them “the superstars of the planet”.

Besides drawing attention to wildlife, he also called on his f8. to pledge(许诺) to reduce e-waste. Within 24 hours, his post was s9. 1.67 million times, and more than 400, 000 followers signed the pledge.

According to Wang, young people are no l10. onlookers when it comes to environmental action; nor should they be. “I will spare no effort to do everything I can to take care of our earth. And I invite everyone to join me,” he said. 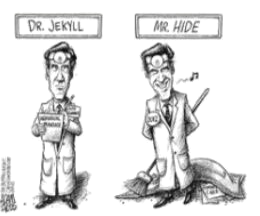 Books written in the Gothic(哥特式) style are popular all over the world. A feature of these books is that they usually mix fiction, horror and death. They have romantic scenes at times. Gothic style books first appeared in the late 1700s in Great Britain. They were especially popular during Victorian times(1837-1901). Many of s novels we read today, such as Jane Eyre and Frankenstein, are from that time period.

One of the story's most important characters is Dr Jekyll, a doctor with a kind heart who lives in London. He and his close friend Mr. Utterson often have dinner together. But one day, Utterson notices Dr. Jekyll behaving strangely after asking him about a crime that happened outside Dr. Jekyll's house. He says that a young girl had been killed by a man. The police believe lat the man may have committed many crimes, but they couldn't find any clues. Mr. Utterson shows great interest in the case, only to find out that the murderer is Dr Jekyll himself.

In fact, Dr Jekyll had invented a kind of medicine that turned him into Mr. Hyde, an evil (邪恶)man. He believed that all humans have an evil side. He wanted to see if he could move the evil part away from the good part.

In the book, the author shows human's dual(双重的)nature. People can have both an evil side and a good side, just like Dr Jekyll: He looks kind on the outside, but he can also be a cold-blooded murderer on the inside. The author uses detailed comparisons and, descriptions to explain the way both sides of Dr Jekyll work Because of this, the novel turned out to be a successful one and has been spoken highly of by thousands of millions of readers since it was published. It has been made into over 120 stage and film versions(版本) so far.

Gothic books are popular around the world for they often mix fiction, horror, death and romance together. This kind of books first appeared in the late 1. century. One of the famous Gothic novels is Dr Jekyll and Mr. Hyde by British author Robert Louis, Stevenson, Dr. Jekyll, one of the story's most important characters, believes everyone has an evil side and a good. side. He 2. if an evil side could be moved away from a good side. So he invented a. kind of medicine which made him 3. Mr. Hyde after taking it. Then he committed many crimes. The book shows humans' dual nature and 4. how the evil side and the good side work by comparing and describing. The novel turned out to be a big success and it has won high 5.from thousands of millions of readers. There also have been many stage and versions of the novel.

China on Sunday issued a white paper(白皮书 )on the country’s battle against COVID-19(新型冠状病毒).

The Chinese government released the white paper to keep a record of the country’s efforts in its own fight against the virus, to share its experience with the rest of the world, and to clarify, its ideas on the global battle, according to the white papers.

“The COVID-19 global pandemic(全球大流行) makes the human beings suffer a lot in a century”, it said.

Facing the “unknown, unexpected, and devastating(毁灭性的) disease,” China started a war to prevent and control its spread, the white paper said.

Making people’s lives and health is first thing to be considered, China took wide, strict, and thorough containment measures(彻底的抑制措施), and has for now succeeded in cutting all channels for the spread of the virus, it added.

Besides the foreword and afterword, the white paper consists of four parts; “China’s Fight against the Epidemic: A Test of Fire,” “Well-Coordinated Prevention, Control and Treatment,” “Assembling a Powerful Force to Beat the Virus,” and “Building a Global Community of Health for All.”

Looking forward to your early reply!

The exercise was __________ the abilities of most students, so very few could work it out.

— Many people say the temperature in Wuxi this spring is just like a roller coaster.

We’ve discussed every detail of this plan and have got everything ready. But still something __________ go wrong. We still have to be very careful.