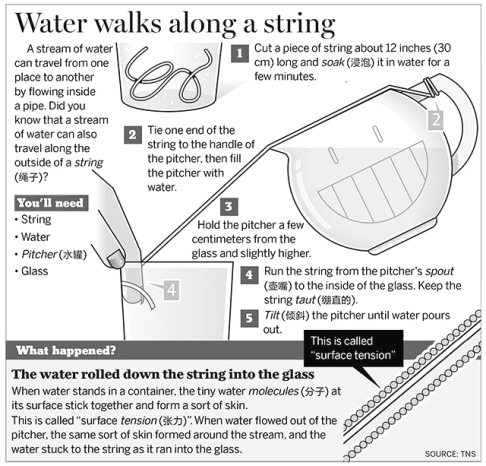 1.In which steps do we need the glass?

Your Internet experience must be uncomfortable when the net speed is too slow — it takes so long to open a web page and the reality shows you’re watching stops every few minutes. That can make you angry.

But it could be a thing of the past. On June 3, the Ministry of Industry and Information Technology announced that China’s major telecom carriers (电信公司) would start to provide 5G services.

The “G” in “5G” refers to “Generation”. 1G let us talk to each other, 2G let us send messages, 3G gave us mobile data and the Internet, and 4G made all of these things faster. The mobile network technologies are developing quickly.

Now 5G promises much faster data download and upload speeds, and more stable (稳定的) connections. This means that you will be able to download a complete HD movie in seconds and only experience a short delay (延迟) between sending and receiving data.

2.What changes will 5G bring us?

With a 5G network, the short delay in information exchange will allow driverless cars to run more safely. Meanwhile, 5G-enabled wearable devices (设备) will be in use in hospitals. Besides,VR games will become more popular with 5G. The short delay of 5G will make the games feel even more real.

3. Does 5G have any disadvantages?

According to the BBC, though 5G will make our lives more convenient, it will not be perfect. For one thing, 1 . On 4G networks, you can be 10 kilometers away from the nearest transmission base and hardly lose signal (信号). But 5G will only cover about 300 meters. And in order to use 5G, we will have to buy new products designed for 5G that are expensive at present.

2.According to the passage, the best sentence for the blank is 1 .

A.5G will not “travel” far B.5G will be used in a limited way

C.products designed for 5G is expensive D.5G has its both advantages and disadvantages

3.What is the passage mainly about?

A.Changes in the mobile technologies. B.The uses of 5G.

Portia gave the decision. “One pound of the merchant’s (商人) flesh (肉) is yours. It is what the contract (合同) says. You may take his flesh!”

Shylock held his knife and told Antonio to get ready. “Wait!” exclaimed Portia. “You will not do anything that is not written in the contract. Is that right, Shylock?”

“Yes, that’s right,” said Shylock. He wondered what the wise young judge was going to say. “Well,” said the young judge, “I have read the contract carefully, and it does not say anything about taking his blood. It says ‘a pound of flesh’. You can take your pound of flesh, but you may not take one drop of his blood. If you take any of his blood, the duke (公爵) will take everything you own!”

Now it was Graziano’s turn to bless the judge and call him wise.

“You wanted justice (公平),” Portia told Shylock, “and you’ll have more justice than you wanted.”

Shylock didn’t want to give everything he owned to the duke. He decided not to take his pound of flesh. He said he would take the money.

“Give me ninety thousand dollars,” he said, “and I will have pity on Antonio and let him go.”

Bassanio was happy to give him the money. He was very pleased that his friend Antonio would not die.

“Wait!” Portia said again. “He does not want the money. It is not written in the contract.”

Shylock said he just wanted to have his money back and wouldn’t even need interest. Bassanio was ready to give it to him, but again Portia stopped him.

“He said he only wanted the thing written in the contract.”

Taken from The Merchant of Venice

1.What do you think of Portia according to the passage?

2.Which is the right order of what happened in the story?

a. Shylock decided to take the money instead of Antonio’s pound of flesh.

b. Graziano blessed the judge and called him wise.

c. Shylock just wanted his money back without any interest.

d. The judge made the decision.

e. Shylock held his knife and got ready to take the flesh.

3.What do you think would happen to Shylock later?

A.He would give everything that he owned to the duke.

B.He would face the loss of everything that he had.

C.He would have his money back without interest.

D.He would try to get Antonio’s flesh in another way.

Have you stroked (抚摸) a cute dog recently? If that dog touched you with its nose, you might find how wet and cold it was. If dogs are so warm and fluffy (毛茸茸 的), then why are their noses so cold?

Before, people thought that dogs had cold noses to help them control their body temperature. But, a new study in the journal Scientific Reports has shown some interesting findings about dogs’ noses. The study found that when the air temperature was 30 ℃, the tip of a dog’s nose is about five degrees cooler than the air. But why is this?

The researchers believed that the tip of a dog’s nose has a special sensory function (探测功 能). So, they did an experiment to test it. The study showed that dogs could find weak heat sources—like a small animal—with their noses from 1.5 meters away.

The study also found that the heat from the objects in the experiment “was too weak to be felt by human hands, even at very short distances”. The dogs were able to sense these heated objects from a distance, but humans were only able to feel the warmth of the object if they touched it.

To know more about it, the research team also studied the brain activity of 13 dogs. When a warm object was put near their noses, there was an increase in brain activity.

“From the two complementary (互补的) experiments, we can know that dogs are indeed able to sense heat from warm-blooded animals, and a special region of the brain is made to be active by such heat.” said Anna Balint, the leader of the study.

1.What did the new study published in the journal Scientific Reports find about dogs?

2.Which of the following words has the closest meaning to “region”?

3.What happened to the dogs when a warm object was put near their noses?

A.They showed no change in their brain activity. B.They had different kinds of excitement.

4.What can we infer from the passage?

B.The tip of a dog’s nose has a special sensory function.

C.Dogs are smarter than other animals.

The construction (建造) of Huoshenshan Hospital was covered ________ (在现场直播).

Communication is important for harmonious (和谐的) family relationships. However, if you don’t truly listen to others, it can be difficult to communicate. Following the listening skills below may be helpful to your communication.

Focus on the speaker’s words and not what you’ll say next. When talking to someone, pay attention to the speaker and his thoughts. You can think of how you will reply later.

Make sure the speaker has finished talking before you talk. Instead of starting your reply at once, it’s not a bad thing to keep silent for seconds.

Repeat what has been said. Try to make a short summary (总结) of what you’ve heard when the speaker finishes. It will show you’re listening and make you and your family communicate better.

Reflect on what’s been said. After talking, reflect on the subject. Try to work out not just what’s being said, but also why it is important.

Do not cut in on others. It can break effective conversation. Do not start talking until the other person has finished.

Never offer advice. Unless you are asked do not offer advice. Offering advice can make it seem like you’re not really listening but to hear what you want. Accept you don’t always have to solve someone’s problems.

Title: How to be a good listener to your family